Here at Toadvine, it is our goal to make sure your athletic needs are met. From the bleachers to the locker room, we've got you covered. We like to focus on things like maintaining your equipment, getting the most sports fun for your buck, and keeping your team in tiptop shape. Today, though, we want to talk about how we can help you wrap up your spring season and get ready for the fall.

With sports like baseball, softball, lacrosse, and tennis wrapping up, now is a great time to do maintenance on your seating and bleachers. Our maintenance and safety arm of the business, Vine and Branch LLC, can do a full-service inspection of your seating and bleachers to make sure they are up-to-date and safe for use next season. Your fan's safety is one of our biggest concerns, schedule your yearly inspection today.

As fall approaches, we can help you prepare for the football, soccer, basketball, and volleyball seasons. We offer a wide variety of indoor and outdoor scoreboards, including the industry's newest and most technologically advanced scoreboards manufactured by Nevco. Our other fall products include basketball systems, accessories, padding, and volleyball equipment. For any of these products, or additional equipment you may need, contact our insides sales team to get a quote.

Our outside sales team can help you with custom projects. No project is too small or too big. We've done everything from The University of Louisville's baseball stadium to Eastern High School's football bleachers. Your project is just as important to us as it is to you and we want to make sure it is done correctly from start to finish. To get your project started schedule a facility visit.

We service and sell products in Kentucky, Indiana, Tennessee, and Ohio. We also sell some products outside of that region. Visit our website to find out more.

KFC YUM! Center Named one of the Best Arenas and Stadiums in America by Rolling Stone Magazine 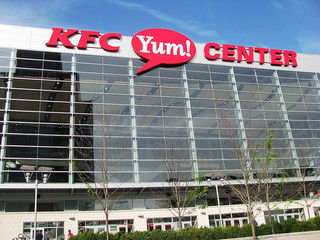 When it comes to arenas that rock, KFC Yum! Center not only rocks the music venue with top, highly-sought after artists, but it also rolls out the red carpet to the University of Louisville men's and women's basketball team and its massive host of fanatical spectators.

Built in 2010, the 22,090 seat, $238 million arena, home to the University of Louisville Cardinal basketball teams, was recently voted as one of the top 10 Venues that Rock, by Rolling Stone magazine.

Not only do last year's NCAA hoops champions call the Yum! Center home, but a full slate of big-name music headliners, including Taylor Swift, The Eagles, Carrie Underwood, Justin Bieber, and Bruce Springsteen have also graced the impressive stage of the Yum! Center, captivating long-time fans and rocking out the multipurpose facility.

Nestled on Main Street between 2nd and 3rd Streets, the backdrop of the Ohio River accentuates the glass facade of the building, along with the wavy interior ceilings and randomly splattered art which give it an inviting and modern feel. As the fifth largest college basketball arena in the nation, this facility displays modern technology at its finest. Developers integrated a scoring and video display system, which includes large LED video displays within the seating area, professional grade LCD screens, and a powerful control system.

Several other interesting features of the arena include:

7 acres of land on which facility is built

760 parking spaces in the facility garage

14,000 square footage in the grand lobby

40,000 weight (in pounds) of the center-hung scoreboard

Former Courier Journal and Sports Illustrated writer Billy Reed says that the arena "was about providing every element of the city's culture — men and women, black and white, business and labor, rich and poor — with the opportunity to participate in a project that will revitalize the city's downtown and make the city a viable option for national tournaments and conventions, as well as the biggest show-business acts in the nation."

"It's a story of how Possibility City turned a dream into a magnificent reality," says Reed, who believes the center is a "blueprint for how a public project should be funded, planned, and executed."

Follow our continuing spotlights on stand-out arenas around the country and find out how Toadvine Enterprises can help you plan a rocking facility for your organization.

Any improvements you make to your school, facility, playing field, or gym equipment is an important one. Especially for custom work, you want to make sure you’re getting exactly what you want and that the manufacturer understands any time constraints, budget limitations, and specific details that you have.

That’s why we think it’s important to offer a free initial on-site so we make sure we’ve spoken to you face-to-face and know exactly what it is you need.

If you would like us to schedule a visit to your facility, please fill out this form. You’ll receive a confirmation email and someone from our office will get in touch with you soon to schedule a meeting. On-site visits are available based on location and current scheduling, but rest assured, your project is very important to us.

If you have any questions before you’re ready to schedule an on-site visit, you can contact us through our website or call our office at 502.241.6010.