The History of Starting Blocks 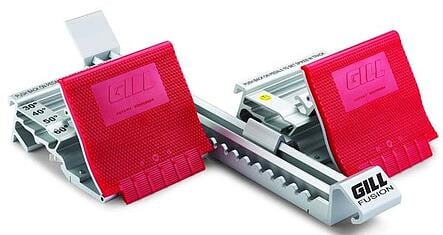 If you have seen the epic film, Chariots of Fire, you may recall the scenes where the runners are preparing for the start of the race. The runners kneel on the ground with little trowels or spades and prepare the ground. They would dig small holes for their feet to gain traction and would not slip. So much has changed from the early 20th century for track and field equipment, including starting blocks.

The first starting blocks emerged in the late 1920s and became a standard and accepted practice in the 1930s. By 1937, the use of starting blocks became mandatory so runners could not have any unfair advantages and all the runners would have "a fair start." The earlier starting blocks would be large enough that the entire length of the runners' feet could rest on the block, but in the early 1970s, starting blocks were modified so the heel would overlap the top edge of the block. The thought behind this was an increased burst because of the calf muscle was more fully engaged.

The former blocks were referred to as high blocks and the shorter versions are commonly called short blocks. There has been a switch back and forth to which are used in recent years, including in the Olympic games. The science behind the start is getting more sophisticated all the time, and although technology is always improving, the most important thing you hear runners saying is they need to feel comfortable in the starting blocks.

Toadvine Enterprises offers the full line of Gill track and field products. We have many great options for starting blocks in every price range, including Fusion, National, Scholastic, Moye, All Surface, and the all-important transporter starting block carts to protect your investment and make moving and storing them easy and safe.

We are at the front of the science of speed and are helping schools get "faster starts through advanced technology." Call us today with your track and field equipment needs. Toadvine Enterprises (502) 241-6010.