The Reality of College Sports Scholarships 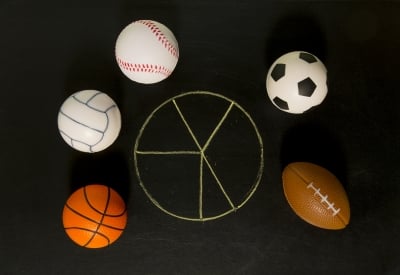 From the moment many children enter the arena of athletics they are pummeled with intense pressure to perform, improve, and outshine. In fact, as we learned in our last blog, intense pressure from parents and coaches can lead to several outcomes, including continually feeding the drive to excel by pouring more money into the pot with additional training and instruction. Some athletes tank under the stress and quit sports altogether, leaving behind thousands of invested dollars and oftentimes, a parent's dream of college recognition.

That competition doesn't end at the college level. In fact, it only heats up. If your child is tenacious enough and talented enough to make it to the college level, you will enter a whole new realm of competition as your child stands in line for one of only a very few college scholarship spots. If you think your star athlete is destined to capture the end-goal dream of a college scholarship, there are some realities about college athletic scholarships that might surprise you. Here are just a few.

According to a review in the Houston Chronicle, NCAA Division I scholarships were awarded to somewhere between .6% and 1.2% of high school athletes in the class of 2008. This total does not include NCAA Division II and NAIA schools, which would make the statistics higher, but only slightly higher. The end result of the review showed that your child's chance of earning a college athletic scholarship are 1in 300. Keep in mind that even if you make the recruiting cut, colleges actively recruit up to ten athletes for every one open spot so that they can freely evaluate and choose which athlete they believe is the best fit for their program.

If your student athlete is fortunate enough to receive a scholarship, it will more than likely only be a partial scholarship. In a chart by BeRecruited, NCAA-mandated scholarship limits are listed. The allotted NCAA baseball scholarship limit for Division I is 11.7. Cross country/track and field is 12.6. These numbers don't even account for a whole team, so unless you are the hottest recruit on the planet, only a small portion of your college expenses will be paid for. You might get recruited, but that doesn't necessarily mean money toward college expenses.

Even if you are sold out to the idea that your child is stellar enough to snag a four-year scholarship to a big school, the harsh reality is this: scholarships at most institutions aren't four-year deals. They are one-year deals, renewed annually. In his article, "The Most Evil Thing About College Sports," Josh Levin states that most college recruits and sports fans don't realize that, "A university can yank that scholarship after one, two,or three years without cause. Coach doesn't like you? He's free to cut you loose. Sitting the bench? You could lose your free ride to a new recruit." So, even if you land a coveted scholarship spot on the team, there is no guarantee you will keep it.

Climbing the Scholarship Ladder Can End Before Recruiting

There are many minefields along the way when trekking the path to a college sports scholarship. With football brings the risk of severe concussions and injury. ACL and hamstring injuries can put athletes out for an entire season and sometimes permanently. What if your child burns out on playing sports and decides it's time to retire the cleats? What if your athlete gets recruited but receives a partial scholarship, leaving the remaining cost to the parent and finances don't allow for this kind of commitment, especially after so much money was spent getting to this point? Aspirations for that 1% chance of a Division I scholarship are dashed instantly.

The bottom line is this, although college sports scholarships are difficult to achieve, some athletes do receive them. With extreme talent and some aggressive marketing of that talent, your student athlete could possibly rise to the top and win an athletic scholarship, but you must be realistic if that is the goal. Dollars awarded and potential spots being recruited for are slim, but not completely impossible. But if you are a student athlete who just enjoys playing sports, follow the lead of one student athlete, Cole Cragin, a talented swimmer who beat the odds and earned a college scholarship, but at a cost.

Cragin encourages other athletes by saying: "Anyone who is competing in a sport and maybe doesn't have that chance to get to the next level, I'd give the advice to play anyway. If you love it, if you are learning how to be a determined, responsible person from playing a sport, play it for those reasons and it will still be worth it."